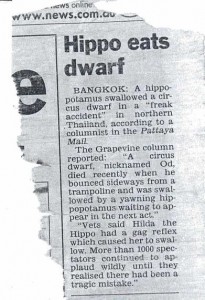 The PubCrew congregate at Mr. Dude’s new pad to record an hour of comedy genius. DC suggests an experiment where someone takes both Ex-lax and Imodium A-D at the same time to see which product would win, Mr. Dude fake-interviews The President, and Abe Froman weighs in on a news story about a dwarf circus performer who was allegedly swallowed by a yawning hippo.

As the night wore on, The PubCrew discuss an Antler Basket in Mr. Dude’s new house and DC questions his home theatre setup in a new segment called “Rip on Mr. Dude”.

As promised, here is the video about the swearing newscaster that DC was talking about during the news segment.